You are here: Business Garden / Customer stories / Three tips: How to successfully move to a multipurpose office

Three tips: How to successfully move to a multipurpose office

ISS continually develops its premises at Ultimes Business Garden in Pitäjänmäki, Helsinki. “We are extremely satisfied with the location. The property’s functionality allows us to very flexibly put our conversion needs into practice,” says Jukka Lindfors, property manager at ISS.

ISS Palvelut Oy moved into the brand-new Ultimes Business Garden in 2016. With the move, the company replaced its open-plan office with a genuinely multipurpose one. Space utilisation has been in active development all this time.

“Originally, we had a total space of 2,700 square metres spread across two floors. Later, we came to the conclusion that the space would be more practical if everything was on the same floor, as working in two floors is surprisingly a significant thing. The second part of Ultimes Business Garden was completed in spring, and in 2019, we moved into a 2,500 square foot space on one floor,” Jukka Lindfors says.

ISS continually monitors the rate of utilisation of its spaces. One important observation has been the fact that less space is now needed due to changes in workplace culture.

“Starting in 2020, the company has been using 1,600 square meters, and that’s been plenty,” Jukka Lindfors says.

Tip 1: Listen to people and challenge them to take part

“It’s always worth taking more time than you originally set aside to interview and listen to people working in the premises. Planned changes are hard to fully understand with only a floor plan. By discussing things together, you also end up developing them together,” Jukka Lindfors says.

Another change that came about at ISS through feedback and practical observations was the realisation that the company needs increasingly fewer large conference spaces in its own premises. As a result, former conference spaces have been converted to other purposes.

ISS now only organises internal meetings in its own premises. Meetings with customers and partners are now held in Ultimes Business Garden’s conference centre.

ISS has 230 people working in its premises across 124 workstations. The number of workstations has been reduced on the basis of usage and feedback, and many have been replaced with soundproof work spaces from Finnish manufacturer Framery.

Soundproof work spaces are in high demand, as these days, everyone has frequent online meetings to attend. 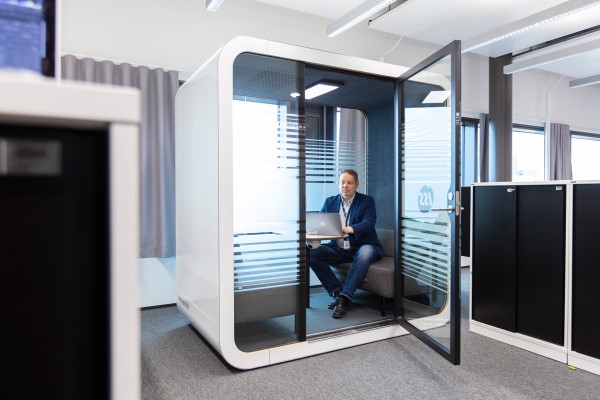 “The move into a multipurpose space and the associated changes in the company’s working culture begin in the planning stage. You should reserve enough time for the move; for us, the process took about a year and a half.

In the planning stage, we emphasised interviewing the different user groups, and the wishes they voiced had an effect on our planning. Of course, the amount of time moving is going to take depends on the size of the company,” Lindfors tells.

For a long time before moving to Ultimes Business Garden, ISS utilised an open-plan office.

“At the time, we had an enormous 3,000-square-metre space that, in practice, was one big hall. Back then, we were already interested in a multipurpose office in which different work tasks would have their own designated areas. We started planning the space with Peab and also had our own architects and designers involved in the process. Taking care with the planning was worth it; the space we now have fits our needs perfectly. We are constantly developing our premises as new needs arise,” Lindfors tells.

Tip 3: Emphasise communication before, during and after the move

“While we were moving, I realised that there is no such thing as too much communication. It’s necessary at every stage: before, during and even after the move. Of course, the most important stage is the one before. Without communication, you might not be able to make the move the way you want to.”

ISS is also responsible for producing services in Ultimes Business Garden. The multipurpose office concept covers everything a company needs: from lobby services and conference spaces to postal and carwash services. Additionally, many services that make staff’s everyday lives easier are on offer. 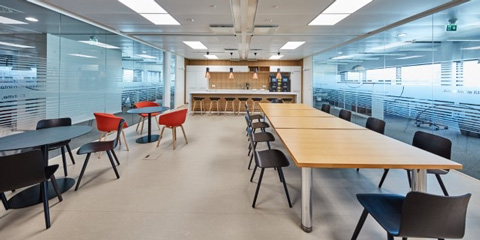 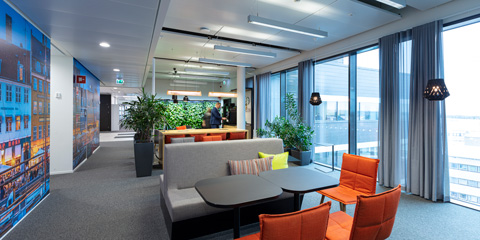 Plan of the new, warmly furnished Working Café space in which people can both work and eat. One draw of the space is the inclusion of two coffee machines that people can use freely. The Starbucks machine is particularly popular. A photo wall adds colour and depth to the space and includes a picture of the company’s home in Copenhagen. Below is an image of the previous break room. 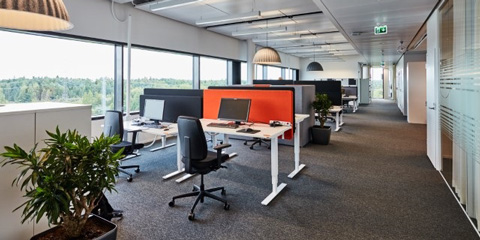 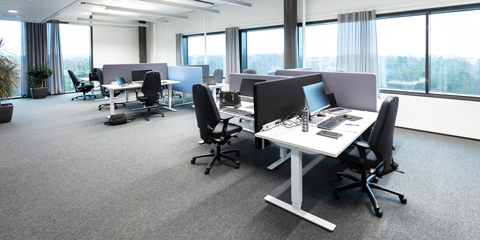 ISS has approximately 230 desks in its premises, all of which are electric standing desks. Desk chairs are also easily adjustable to the user’s preferences. ISS also tries to arrange desks in layouts other than rows. The so-called propeller arrangement, in which each desk has two dividers, is becoming ever more popular.

Our web site uses cookies. A cookie is a small text file that the web site stores on your computer. Cookies are commonly used to improve your experience of the web site and to adapt it to your requirements and selections.

Cookies on our web site
We use cookies to give you the best experience when visiting our web site. There are three kind of cookies. All of them might be used by our web site.
• Permanent cookie: This kind of cookie is stored on your computer for a certain amount of time. A permanent cookie is used, for example, to enhance your experience of the web site.
• Session cookie: The cookie is temporarily stored in the computer’s memory while you visit the web site. As you close your web browser, the session cookie is deleted.
• Cookies for statistical purposes: These cookies are used to gain data about how many visitors the site has.